Quadrophonia, a new style. Straight from the mind into a Cubase file.

Archive for the tag “Veggie Conquest”

Where do I begin? I truly haven’t updated here in a long while and I sincerely apologize for this discrepancy. I’ve been a bad bad blogger…

It’s summertime now, and it sure as heck feels like it in this here city, cats. How was yesterday’s weather you ask? It was a brutal 93 degrees and it might have felt like 103 as I wandered over to Soy & Sake for lunch.

Ae you inquiring about where have I been?

These days life goes like this
Wake up, check that off of some list
Gotta be a little something more than this
at the bottom of my coffee cup
I keep a postcard in the back of my mind
White sand, sunshine
And you’re shining like a brand new dime
That’s keeping me from giving up
Thinking like I had enough

Firstly: I won Prom Queen. That’s right, cats. Veggie Prom Queen of 2012. It was a fun night that was full of laughter, dancing and friends. David Karopkin, my fellow Woodstock Farm Animal Sanctuary volunteer won for Prom King and we had our “dance” to Boyz 11 Men. Yes, this may have been a childhood dream to be spun around to “Bended Knee” but at 30,  it was just entertaining. Thanks to David who actually got on his knee and fulfilled that childhood dream of a man singing that song to me, on his knees.

Next weekend was the Veggie Pride Parade in which I was asked to walk in the front of the parade holding the banner.  Jacquelyn, my darling roommate spoke me into dressing up for this event even after my dismissive thoughts of just wearing my favorite school girl vintage skirt and a Vaute Couture tank. This year the sun was shining down on us and everyone was in good cheer for being Veg. After the parade, a few of us wandered over to Lula’s where I had arranged with my sissy, Diana and Kneel and Alicia to meet us there. We ended up hanging out there, taking over the front of the shop and the bench for several hours before requesting that we walk over to Moo Shoe’s.

The next morning was Memorial Day and I had plans to meet at Champ’s in Williamsburg for brunch. Kneel ended up being our resident “adviser, a great “job” for him as part of a all-female table. 😉

After brunch, I mentioned that it’s not Memorial Day until I had one drink so Michelle, Kristy, Elizabeth and I found a bar nearby and had some delicious chilled cocktails.

On Monday, I returned to my routine and snapped right back into reality.I realized I had to get past certain “stunters” and let go…of people, places and things.

Several other events have occurred: Woodstock Farm Animal Sanctuary Rooftop Party in which I volunteered and sold raffle tickets. Derek Goodwin, a good friend of mine fire danced as we all watched not wanting to even blink just out of pure enjoyment. There was food from VSpot, Blossom Du Jour, Blossom & a few other local vegan eateries and caterers.

Then came  the first annual “The Seed: A Vegan Experience”, which was located at 82 Mercer street and showcased everything from inspiring speakers to tasty vegan food to vegan fashion.My friend Gabe, gave my mother an extra ticket and we went happily together on Saturday and I watched in pure joy as she excitedly asked questions about veganism and wanted to learn and went from table to table trying new vegan foods and took delight in the day. On Sunday, I modeled for Melisser  as she did my cruelty-free makeup with a bold red lip.

I have been modeling a lot recently once again, as I take pure pleasure in it (that’s not obvious, is it!?). I am lucky enough to know plenty of talented photographers who ask me to take part in their photo projects. Always with a vintage style: I oblige.

I have missed updating this blog and promise to return to updating it frequently.

Now check out some pictures! xo…

My mother and I ❤

The Veggie Pride Parade had a magnificent turn out!

Cecilia visiting for her art show

Robert Poswall working his magic with a lens

Jen and I. We Heart.

WIth my inspiration & the co-founder of the Woodstock Farm Animal Sanctuary, Jenny Brown

With two of my favorite girls, Dania & Kristy

I am mod about this poster.

It’s that time of year again: when the “Annual Veggie Prom” which usually happens in the same lovely weekend as The Veggie Pride Parade, but this year the parade will take place on May 27th.

I can’t believe it’s been a year as so many things have changed in my life.

– leave Riverdale to start a new chapter in my life, even if it was quite hard.

– Realized that my true friends are supportive and fell in love with them all.

– I moved to Astoria.

– Started volunteering  more often with PETA and traveled the country on an activist tour.

– Wore lettuce bikini’s at the capitol in DC.

– Interviewed by PETA for being a volunteer. 🙂

– I moved to Brooklyn into a vegan house, where I am content and happy. And adore my roommates.

– Finally found a job that I am happy going to daily.

– Became a Board of director at The Yippie Museum Cafe.

– Became closer to the friends I have.

– Experienced and conquered and thrived…

– Had a vintage motorcycle ride I didn’t want to end….

– And went back to Woodstock Farm Animal Sanctuary as much as I can and threw a successful benefit for them.

Are you asking why I am posting this? Because again, I am running for Veggie Prom Queen.

It’s a night of dancing, enjoyable vegan refreshments and just good ol’ fun.  Especially if you are like me and didn’t really enjoy your first prom: you’ll be quite pleased you attended this one! Donations will be made to Mercy For Animals.

Come on out on May 18th and celebrate and vote for me as your Veggie Prom queen for 2011!

And don’t forget those dancing shoes!

And for now until then: nominate me & campaign for me. 🙂

How to nominate someone:

In the subject line, put the full name of the person you would like to nominate.

In the body of the email, write one or two sentences about why you think this person should win.

Campaigning is not only allowed but encouraged! Some ideas to campaign about: what the nominee has done for the animals or veg*n movement, their character, how foxy or totally awesome they are… It’s up to you!

I’ll see you at The Prom! (Oh, will I have a date? ha!) and walking in the Veggie Pride Parade on May 27th.

Random Post: What people think activists do…and what most of us really do… 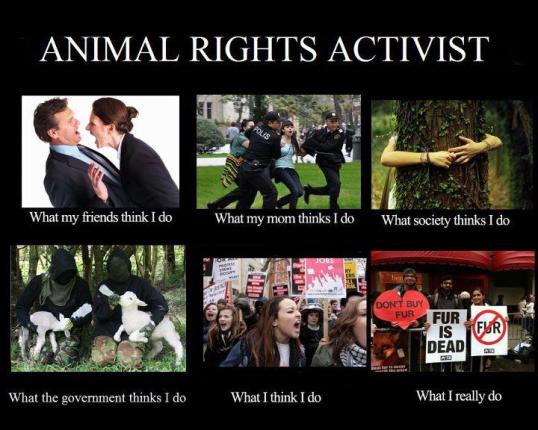 What we REALLY do...

I am awake, it is exactly 7:20 A.M. and my lovely mother posted this on the wall of my Facebook while I was asleep and it quickly caught on to most of my activist friends and has now been forwarded all over the world.

The truth is this graphic really does depict and define how people assume that us animal activists act during demonstrations or whatever we do.

I am not a trouble maker though one may think I am when I tell them that I grew up as an activist but to me activism is educating, with a cordial smile on my face. I want to be the activist that is easily approachable on why we are out there: not the activist who scares the people away as they run screaming down the block.

When my friends and I stand outside with our signs, flyers and any other literature we may have…we just hope to get approached: asked questions. We actually encounter quite a bit of criticism from fur owners, people who eat meat and I have actually almost been hit because I defended a friend who was about to get punched at a Foie Gras Demo some years back when this guy stepped out of the restaurant drunk to yell at him.If you know me, don’t mess with the people I care about because I will defend them in a manner that will make a person feel tiny as they act immaturely and I can hold my composure, with a smile on my face.

So here are several photos of my friends and I at the  INTERMIX protests that I am the NYC campaigner for: 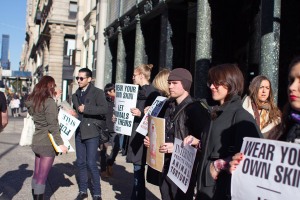 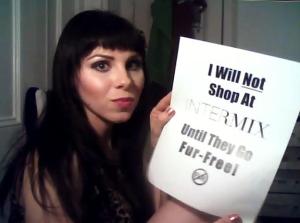 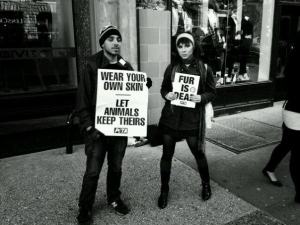 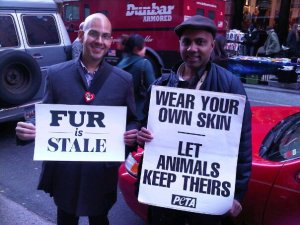 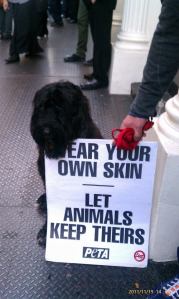 I have plenty of other photos, where we are talking with people, handing out flyers and information and smiling. Not all cases and circumstances are negative, in fact under many circumstances people are polite in return to us, asking us questions and trying to educate themselves. We are out there standing in all-weather conditions to speak from our heart.

The thing is: activism comes out and is expressed in so many ways, annually there is a Veggie Pride Parade in May along with a Veggie Prom (Where last year I ran for Prom Queen and this year I will be running again) and we all participate in many FUN events where just by not participate in eating a morsel of meat, drinking a glass of milk and or wearing a pair of leather shoes: we are acting. We have catering companies and parties dedicated to the truth of food…and follow with events & benefits.

We are changing the world. Veggie Pride Parade is one of the most enjoyable acts of activism that I participate in annually to see friends, eat great food and have fun as we march down the streets: 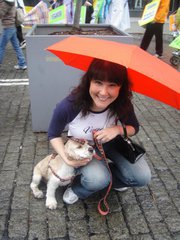 And this is the truth: We ❤ and I mean LOVE animals and when we do human rights: ❤ the humans we are defending.

Last summer, a friend of mine was arrested just for standing in front of Mayor Bloombergs mansion with a sign speaking up about the Geese being gassed to death in Prospect Park every year, ARRESTED! He did not do anything wrong and if you met him, he is possibly one of the nicest guys I have ever known. I was disgusted by this. Since when is freedom of speech a violent attack? Activists are not harming anyone by speaking their minds….

Especially if you just stop to listen. Come to events for activism that you believe in: Animal, Occupy Wall Street & Human Rights, Political…

So, please, don’t label us. And don’t suspect that I am someone violent or someone who acts without cause: I love human beings and to me, that includes the mortals (because we are all mortal), who have no voice but the cries they were given. Stop and listen to those or stand outside with us.

And, on a side note, I have been lucky to have family & friends who appreciate me for who I am, and what I do. If someone who knows me can’t accept me for my beliefs then they weren’t friends of mine to begin with……<3 🙂

And yes, I admit: activism comes in all forms & from different spectrum’s & all actions. Not all of us are peaceful demonstrators but most of us choose different tactics and choose to be peaceful.

I want to change the world through my heart.