Quadrophonia, a new style. Straight from the mind into a Cubase file.

Archive for the tag “John Lennon”

Calling out around the world
Are you ready for a brand new beat?
Summer’s here and the is right
For dancing in the street…. 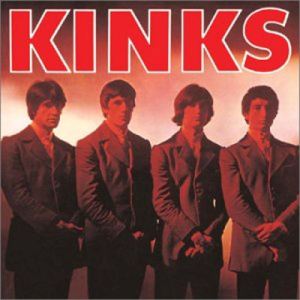 Ah! I just love The Kinks and that song and the fact that it gets me all giddy and I end up, can you guess what I end up doing? Dancing in the street.

They’ll be dancing in Chicago
Down in New Orleans
In New York City
All we need is music, sweet music
There’ll be music everywhere
There’ll be records playing,
Dancin’ and swayin’
Dancing in the street… 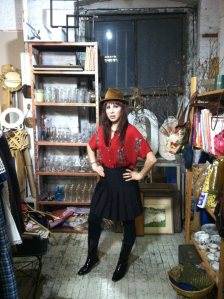 (I didn’t snap a photo of me yesterday so I am using a photo I took with the same outfit at Stache.)

And thus yesterday on my way to Williamsburg, I did just that! Swaying and singing to myself as I rode the train to meet a good friend of mine and head over to Foodswings in Brooklyn where they cater to the needs of vegans(and non vegans!) wanting some good ol’ comfort food.  I ordered my gluten free BBQ veggie chick’n drumsticks & metal fries which happen to be drizzled with vegan cheez, bleu cheez & hot sauce…mmm mm…just my thing, well once in a while because after it usually leaves me in a coma and I have to literally drag myself up from the seat and ride the train home feeling a bit dazed. Though I feel this way every time after indulging, it’s a need of mine to do so, for I am impulsive and love to indulge! mm….

So lets talk about the present day. This morning I got on the train carrying my guitar through rush hour: always a tedious thing and I get quite worried I will bump into something and it will be destroyed! I know this won’t happen, but you know, I try to take care of my things as best as I can. 🙂 This beloved guitar of mine has become sentimental because my friend Jen gave it to me as a gift as it was hers previously. It’s in great shape and one of my goals is to basically be able to play guitar pretty well as I enjoy writing lyrics to songs and strumming but I want to be able to really make my own music.

Basically from birth, I wanted to sing like Janis Joplin, write like Patti Smith and be able to capture the hearts of so many with my spoken word: expressing myself and having others understand what I am feeling as I share my passion. I may not be able to do that but I will be able to at least enjoy the confidence I have of the arts I enjoy: and play a sinful riff with lyrics that go along with it. This is what happens in the mind of a toddler who grew up with art in her veins. 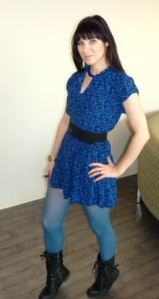 I am mod about this purple & blue thrift dress I picked up that instantly cheers me up. (It's forever 21 but bought it thrift.)

Well, doesn’t matter what you wear
Just as long as you are there
So every guy grab a girl
Every night around the world…

In the town where I was born,
Lived a man who sailed to sea,
And he told us of his life,
In the land of submarines…..

The epic 60s Beatles film, Yellow Submarine is just another one of my many favorite movies growing up that always seems to bring back memories every time I watch it presently. I remember waking up to the Beatles and or I would be showering in the morning as a child and my father would be playing his records in the other room. I would sing along to all of my favorites back then and currently: The Beatles, The Monkees, Jimi Hendrix & The Doors (and many others) would blur out to me through the walls and I’d be singing along at the top of my lungs.

I was no doubt a Beatles fanatic growing up & drawing yellow submarines on my school folders, watching the movies when friends came over and watching “Thomas The Engine” just so that I can watch Ringo Starr act.  I would call myself Lucy (as in Lucy in the sky with diamonds) and purposely have my father bring me up to Strawberry Fields as much as possible. I’d enjoy every Paul McCartney film, pretend I am in a pure white room like in the Imagine video with a piano as I close my eyes and listen to John Lennon sing about peace.

So we sailed on to the sun,
Till we found the sea green,
And we lived beneath the waves,
In our yellow submarine….

Flowers in my hair, something I was able to do quite often as I grew up traveling with my family to where our friends lived in the country (and I mean all over the country). During the summers I would be taken out of the city and we would usually live out of cars or buses with rainbow flags and again, lots of flower power. This might be a reason why I love road trips so much because I would wake up in the morning, squinting to the sun and feel the slight rejuvenating chill that awoken me in the first place and asking someone around me where we were. I would enjoy waking up in anywhere from Maine to Nevada to New Mexico and run outside to feel the earth between my toes and my fingers and bask in the sun.

My summer dresses were long and flowery (Gunne Sax style) and I would twirl in the sun with my friends as we ran through fields soaking in what nature has given us: peace. We lived free from restraints during the summers as we would fall asleep in beautifully crafted teepee’s to the camp fire’s shadows dancing on the walls. My memories are full of sweet, serenity from my childhood as I look back now, singing “Puff The Magic Dragon”  with my friends as we went on hunts to find, crystals.

Let’s journey to the present times with my outfit for the day: 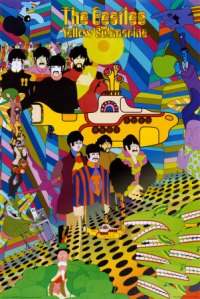 Even though I know that this movie did not involve the Beatles in this project very much at all, even the voices weren’t them in the movie itself and all they really did was support the films existence, it still strikes me as one of my favorites. (Though I love all the Beatles movies, especially Hard Days Night and Help).

And our friends are all aboard,
Many more of them live next door,
And the band begins to play…..

Before I close today’s post with a fun picture: I want to say thank you to the friends I saw last night at Vegan Drinks for the compliments that I have received on the blog. I enjoy that my friends appreciate listening to my babble as much as I love writing it. 🙂 It was a fun night filled with lots of treats….mmm mmm!

And believe me, I would love to live in a yellow submarine over the weekend.